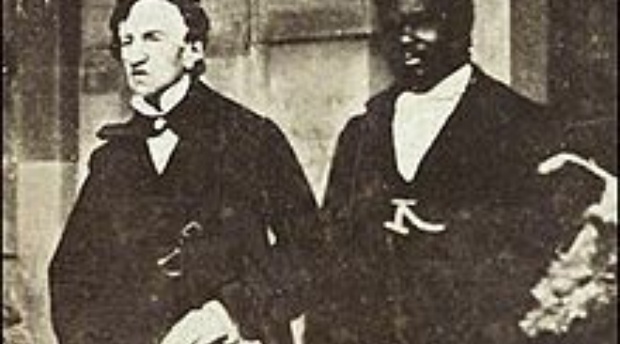 From 1726 till well into the 19th Century the Chavonnes Battery was the main watchdog at Cape Town’s gate, but at various times it also served other purposes in addition to its main function, one of them being as an isolation and quarantine area for people infected with or liable to contract smallpox, a major killer of those times.

Born in Ireland, Barry graduated from the University of Edinburgh’s medical school in 1812 and in 1813 joined the British Army. After service in India (and possibly at the Battle of Waterloo) he arrived at Cape Town between to take up duties as a regimental surgeon in the garrison.

Barry got off to a good start; almost immediately he was appointed medical inspector for the entire colony, after saving the life of one of Governor Lord Charles Somerset’s daughters. The fact that he had a powerful patron in the shape of the Earl of Buchan probably did no harm either.

Barry proved himself worthy of the post, although still only in his twenties. He became good friends with Somerset, who indulgently described him as “the greatest physician I have ever met, but absurd in everything else.”

It was an accurate description, since Barry with his shock of red hair was one of the most peculiar characters the Cape has ever known. He was narrow-shouldered and stood just five feet (147cm) in his stocking feet – well under average height even for those times. He had a high voice and a beardless face at a time of general facial hairiness.

Barry’s personal habits were as peculiar as himself. He preferred to go about his business in his dress uniform, complete with large cocked hat and a heavy cavalry sword, and carrying a parasol. He was accompanied everywhere by a Jamaican manservant named John and a black poodle named Psyche, whom he treated at a confectioners’ shop every day. He was a vegetarian and teetotaller in an age where consuming large quantities of meat and drinking plenty of port and brandy was almost universal - as far as Barry was concerned, wine for was only good for bathing in because the alcohol reduced the risk of infection - and kept a goat for its milk.

Malay humorists nicknamed him the “Kapok Dokter”, the Bantam Doctor, and once again it was an accurate description, because Barry was a typical bantam cock of a man.

In addition to compensating for his physical deficiencies by wearing shoes with three-inch-high soles and oversized jackets with stuffing in the shoulders, he had a fierce temper and a reckless disregard for the opinions of others which soon generated a large variety of enemies.

He was famously tactless, impatient, argumentative and opinionated; officers of the garrison might laugh at his unmilitary appearance, but only behind his back, because anyone who commented on his voice, features, or professional ability was liable to be challenged to a duel – Barry was an expert with pistol and rapier, and fought at least once.

What caused the duel has now been forgotten. Perhaps it involved rivalry for the affections of a woman, since in spite of his less than masculine appearance Barry developed a reputation as a ladies' man, and it was rumoured that one of Somerset's daughters had a crush on him.

But on the other hand Barry was a very good doctor whose ideas were sometimes decades ahead of their time.

He made bitter enemies among officialdom by railing against poor medical treatment of the impoverished, prisoners, lepers and lunatics. He tried to improve the soldiers’ living conditions and diet, preached cleanliness and made war on insanitary living conditions – among other things he deduced he determined that Cape Town's impure water supply was a cause of much needless ill-health, and successfully pressed for a better system.

He would take on cases that other doctors considered beneath their dignity, and while he might fight with his peers, he treated his patients, rich and poor, with equal compassion,; according to one woman “no man could show such sympathy for one in pain."

He was also a daring surgeon, and on one occasion performed a successful Caesarean section on a mother of the prominent local Munnik family who was having difficulties in giving birth.

It was one of the first such operations in the world, and certainly the first in Africa - the little boy who was born was christened James Barry Munnik by his grateful parents, and grew up to become the godfather of General James Barry Munnik Hertzog, Boer War hero and twice Prime Minister of South Africa.

Barry left the Cape in 1828, soon after the resignation of his patron and protector, Lord Charles Somerset, and went on to serve in many military outposts of the Empire, frequently getting into – and out of – scrapes with his contemporaries. He achieved high rank before retiring in 1864 - reputedly against his wishes — and returned to England, where he fell ill and died on 25 July 1865.

But in death James Barry proved as controversial as he had been in life. The woman who laid out his corpse claimed that the deceased was not only a “perfect female” but had stretch-marks indicating she had given birth at a very young age.

Barry’s doctor, Major D R McKinnon, denied this, saying that in his opinion Barry might be neither male nor female, but “an imperfectly developed man … my own impression was that Dr Barry was a Hermaphrodite.”

And there the matter ended. The British Army sealed all records for 100 years and Barry was buried in Kensal Green Cemetery with his full rank inscribed on the tombstone. The only person who might have provided an expert outside opinion, his manservant John, went home to Jamaica and never revealed anything.

Research from the 1950s onwards indicates that Barry was born Margaret Ann Bulkley in 1789 into a well-connected family. Left destitute by her father’s mismanagement of the family finances, her mother and some liberal-minded friends conspired to create a new male persona for Margaret so that she could undertake medical studies, which was unheard-of for women in those days (“Barry” was Mrs Bulkley’s maiden name).

And there the matter rests. Short of exhuming Barry’s remains, no-one will ever know for sure whether the fierce-tempered little medical officer who spent time restlessly pacing the Chavonnes Battery’s ramparts during his quarantine there was actually a girl who struck a pioneering blow for women’s rights at a time when the concept did not even exist.