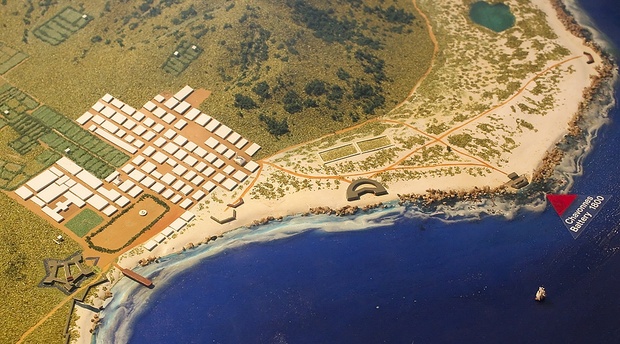 The Castle of Good Hope was a formidable state-of-the art fortress which was quite capable of giving a bloody nose to any likely attacker rash enough to attack the “Caabsche Vlek”, but it had an Achilles heel. There was little to prevent an attacker landing at any of several places on its western flank and then marching on it through the dunes where Green Point and its environs now stand.

All that changed with the arrival in 1714 of the 11th commander of the Cape outpost, Governor Maurits or Maurice Pasque, Marquis de Chavonnes. In spite of his very French-sounding name, De Chavonnes was a second-generation Dutchman of noble blood whose grandfather, Joachim Pasque, the Marquis de Chavonnes, had fled from France to the Netherlands after the St. Bartholomew's Day massacre of Protestants in 1572.

In 1654, when the Caabsche Vlek was just two years old, Joachim’s grandson Maurice was born in The Hague. A born soldier, he joined the famed "Staatse Leger" or Dutch army and eventually rose to command an infantry battalion during the 1701-1713 War of the Spanish Succession. De Chavonnes resigned after the war, entered the DEIC’s service, and was soon named to replace Cape Governor Louis van Assenburg, who had died at the very end of December 1712.

The outpost’s unprotected western flank was intolerable to an experienced soldier like De Chavonnes, and although the Lords Seventeen had instructed him to hold down expenses he persuaded them that to deter any aggressor attacking from the west it was necessary to build a strong elevated battery on a rocky promontory at the water’s edge where the lower slopes of the "Lion’s Rump" (now Signal Hill) ran down into the sea. It was a massive undertaking for an outpost as small as the Caabsche Vlek and took 11 years to complete, thanks at least partly to a shortage of lime and masons – and, no doubt, funding from the ever-parsimonious VOC. But when it was inaugurated in 1726, it was a formidable piece of work.

Sad to say, however, the man who had created it was not there to see the battery fire its triumphant inaugural salute. On 18 September 1725, with the battery only a few months from completion, De Chavonnes fell ill and died after just one day, aged 72.

The many names of the Chavonnes Battery...

The battery might have been the brain-child of Maurice Pasque, but it did not get its current name till almost two decades after his death. It was variously known as the "Grote Batterij", or Great Battery, the "Water Casteel"(Water Castle), the "Water Schanz" (Water Breastwork) and the "Mauritius Battery", a play on his first name. It was only officially dubbed the "Chavonnes Battery" in 1744, a long-overdue honour, but one which has lasted for more than 270 years.