Posted by Willem on Tue August 9, 2016 in The characters. 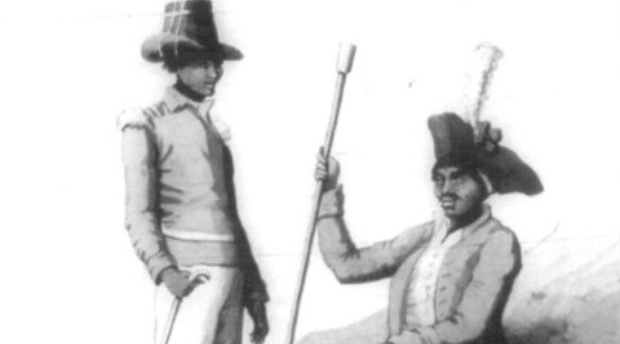 The Cape of Good Hope was a welcome sight for those on the journey beyond the end of the known world. It meant a reprieve from rancid water, salty meat and ships biscuits filled with weevils. For the soldiers and sailors of the Honorable Company, the promise of a new beginning.

Much has been written about the Cape’s fortifications such as the Chavonnes Battery during the VOC’s rule, but surprisingly little about the soldiers who manned them. Yet this is a fascinating field of inquiry. Even so, enough clues exist for us to form a reasonably accurate picture of the soldiers of the Cape garrison.

First of all, he was probably illiterate or at least just literate enough to be able to scrawl his name on an official document. He would be very likely to be a Protestant of some kind, Dutch Reformed or Lutheran, say.

Secondly, he could have come from any of at least a dozen nations in from many different parts of Europe and further afield; at various times the garrison had Dutchmen, Germans, Frenchmen, Flemings, Scandinavians, Irishmen, Danes, Scots and even Englishmen in its ranks. Since the Company did not concern itself much about racial origins, it is also very likely that at least some of the soldiers were full-blooded Asians or people of mixed descent who had served in the Company’s Eastern forces.

The one thing they had in common was that till very late in the Company’s rule they were not Cape men, because the VOC recruited only trained soldiers for its full-time garrison, although all its part-time soldiers were, of course, locally born.

The indications are, though, that most of them were either Dutchmen or citizens of the various small German-speaking states (Germany as we know it only dates from the 1870s, when almost all of the small states were united).

There were at least two reasons for this.

Firstly, the Company did not quite trust all its mercenary soldiers to fight if there was a foreign attack (one must remember that the strongest of the East India trading companies – the Dutch, English and French companies – were all in the habit of hijacking one another’s outposts, and the Cape was a very important one because of its position as a replenishment station on the east-west trade route).

Secondly, in those days there were very close cultural ties between the Dutch and the Germans. In border areas which are today officially German, such as East Friesland and the Lower Rhine the two cultures were so blurred that some regional dialects were as much Dutch as German.

This had another advantage – soldiers (and sailors) from areas where the first language was a dialect like Platdeutsch (Low German) would have no difficulty in understanding or speaking Dutch.

No doubt this is why Commissioner Rijckloff van Goens directed as early as 1657 that only Germans and Dutchmen – which naturally included Eurasians from the VOC’s other outposts – should allowed to serve in the garrison.

This does not mean that people of other origins did not serve in the garrison, so your gunner manning the ramparts of the Chavonnes Battery in the VOC days more than likely answered to “Schultz” or “Van Dam” - but he might also have been called O’Neill, Smith, Bourrasse, Andersen or Macnab.

Was he a reasonably happy man? Probably. The work was not too hard; although his pay was miserably low, food was plentiful and cheap, the climate was better than at home, wars were far less likely than in Europe, and there was a permanent skills shortage so that if he was a sail maker, carpenter, cobbler or something similar he could always make money on the side during his off-duty hours.

Then again, he might become a farmer when his contract had expired, or if a farmer in need of skills could ask the Company to release him (Knecht). More than one garrison soldier ended up marrying the widow of the recently deceased farmer for whom he had been working.

In De Chavonnes time all free males – including freed slaves - within the jurisdiction of the outpost were liable for some form of part-time military or paramilitary service. The indigenous Khoina were not liable for service, although many served voluntarily for a number of reasons.

The traveler Carl Peter Thunberg noted that:…”sailors and soldiers, are in many respects treated worse and with less compassion, than the very slaves themselves. With respect to the latter, the owner not only takes care that they are clothed and fed, but likewise, when they are sick that they are well nursed and have proper medical attendance. The former go as they can, viz. with naked torsos or dressed in tattered clothes, which, perhaps, after all, do not fit them; and when one of them dies, it is a common saying, that the Company gets another for nine guilders.”

The narrative of the early Cape history and the authentic setting creates a unique opportunity for Tourism Graduates to gain work experience. Today you can join guides from local communities dressed in period costume of a VOC soldier who will enlighten and delight with authentic narrative, stories and anecdotes. Time travel to the 17th and 18th Century Cape Town,...

Guides from local communities dressed in period costume of VOC Soldier who will enlighten and delight with authentic narrative, stories and anecdotes.