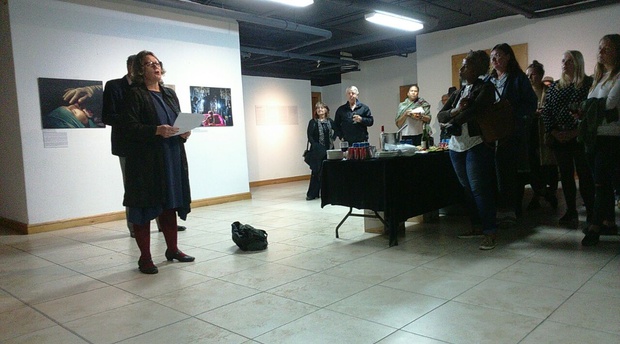 In bringing this exhibition to Cape Town, South Africa

In his exhibition, 1%: Privilege in a Time of Global Inequality, curator Myles Little used wealth as a dividing criteria to create an image of global inequality.

Through a process of carefully selecting very specific photographs by thirty three leading photographers, he successfully managed to offer the other 99% a rare vantage point: a glimpse of a world which will eternally be out of reach to them.

“I chose photographers who make beautifully crafted, thoughtful images.” Says Little, “I wanted a very cohesive aesthetic, and only chose calm, medium-format color images”. Little’s selection of images made over the past decade, takes viewers on a journey around the world, and creates a visual record of the very abstract concept of privilege. From a luxurious opera house in Monaco to heavily guarded mines in Tanzania; from a man floating in an infinity pool on the fifty seventh floor of a hotel in Singapore to a concrete wall embedded with glass shards right here in Cape Town; from a young girl jumping in her home cinema in Moscow to a disabled man cleaning a street pavement in Hollywood; from Shanghai to the Nevada Desert; from the United Arab Emirates to Kenya.

Individually and collectively these images raise and comment on issues relevant to South Africa, but perhaps most pertinently so is Shane Lavalette’s meditative photograph taken at Harvard University in 2006. With this single image Little draws attention to what he calls the failure of the education system “depending on where you live, and the privilege you come from” in the United States.

Access to education and the cost of it is a topic that we as South Africans have become very familiar with these last few months, and is arguably one of the primary enforcers of inequality worldwide.

Paolo Woods and Gabriele Galimberti (INSTITUTE) write in their artist statement “for more than two years we have travelled to the offshore centers that embody tax avoidance, secrecy, offshore banking and extreme wealth, driven by a constant obsession with translating this rather immaterial subject into images. We have produced a body of work that shows what these places look like, but, even more importantly, what they mean.

It has been estimated that as much as $32 trillion are sheltered in tax havens worldwide, largely out of sight. That is thirteen times the GDP of the United Kingdom. Much of this money is stashed offshore by very wealthy individuals. But a growing share is owned by companies that use tax havens, often legally, to escape financial regulations or to reduce their taxes, draining the resources countries can spend on education, health care and security.”

South Africa is the fifty-fifth stop for this exhibition. After the opening in New York in 2015, it has now enjoyed what has nearly become a world tour, many of the venues being important photography festivals in countries including China, Nigeria, Australia, Guatemala and Bosnia and Herzegovina.

In bringing this exhibition to Cape Town the hope is that we can start our own inquiry into wealth inequality and be encouraged to constructively add to what Little had intended and initiated - a dialogue. Countless exhibitions hosted both nationally and internationally have addressed and denounced poverty, while few have investigated privilege. What sets Little’s exhibitions apart is that he deliberately chose to not investigate inequality through the lens of poverty.

South Africa is one of the most unequal societies in the world. Once known as a rainbow nation, with a democratically elected government, inequality continues to drive a widening wedge into our society with phrases like white privilege and decolonization becoming part our every day talk. Ironically this exhibition features no South African photographer (the only South African born photographer who was included in the original exhibition in New York did not want to participate in the exhibition in Cape Town).

It is rare that the history of an exhibition space contributes to the narrative of an exhibition. In the case of the Chavonnes Battery Museum it cannot be ignored. The museum is home to the archaeological ruins of a VOC (United East Indian Company) fort that had been buried for 140 years. The VOC was formed as a combination of mercantile organizations in 1602, when the Dutch government granted it a twenty one year monopoly on the Dutch spice trade. It is recognized to be the first multi-national and first chartered company to issue shares. It grew to become the largest trading and transport enterprise in the world before it was liquidated in 1795. Buried in 1860 when the harbour was built, the Battery was re-discovered in 1999 when BOE relocated to the        V&A Waterfront which is currently the offices of Nedbank Private Wealth.

Little shares the genesis and details of how his exhibition developed in his curatorial statement which is presented in this exhibition space. His goal for this exhibition is also clear: “I want to reach as many people as possible: liberal and conservative, rich and poor, here and abroad,” Little says. “If you are at all concerned that the top one percent owns fifty percent of global wealth, or that six members of the Walton family own more wealth than the bottom forty percent of America, then this is the show for you.”

This exhibition has a potential audience reach of 99% of the world’s population; how then as cultural workers can and do we affect change? What is the worth of dialogue, and how does dialogue translate into change? Would this exhibition, after having been to fifty five venues across the world, have changed anything?

Indeed it has, by providing a visual reference of what privilege looks like - a rare view of a skewed world.

Ultimately this exhibition is a celebration of the medium of photography; a medium that is powerful, accessible and as Little likes to say “easily consumable” in spite of the fact that it attempts to raise public awareness about the deplorable state of our world. This dichotomy is exactly what makes photography such a powerful medium. Collectively, this collection of photographs through a zigzag of multiple modes of expression, present a composite image of what is considered the great moral issue of our time. We are extremely grateful to Myles Little and all the participating photographers who have so generously agreed to be part of this dialogue in Cape Town.

This is an invitation to now engage in this dialogue of privilege.