How Lion's Head got its name 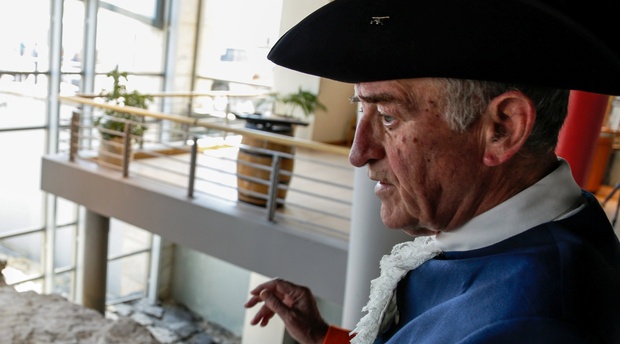 We asked Willem Steenkamp, "Why Lion's Head?". He shared the story of black-mane Cape lions and adventurers, all colorful characters...

WHY “LION’S HEAD"? by Willem Steenkamp

Lion’s Head and its surrounds are Cape Town’s most historic area – or perhaps “pre-historic” would be a better description, because its name dates back to well before Jan van Riebeeck landed on the shores of Table Bay in April of 1652.

The locals had names for the mountains looking down on the bay and its approaches long before the first ships from Europe began calling in at what is now the Cape of Good Hope on the long haul to and from the Far East. But nobody else paid much attention to little details like that.

Among the early visiting place-name enthusiasts was the 16th-Century Portuguese seafarer Antonio da Saldanha, who sailed into the future Table Bay one day and, like visitors ever since, was impressed by the great flat-topped mountain with its buttresses and flanking peaks which overlooked everything.

The locals called it by the logical name of “Hoerikwaggo”, or Sea Mountain – but Saldanha gave it a new one, the equally logical “Table Mountain”.

This might have been pure high-handedness, which was in fashion in those days, but most likely it was at least partly the result of more practical considerations. Seafarers needed descriptive names to assist them in finding out where they were, and personal communication must have been hampered the language problem. Whatever the case, Hoerikwaggo became “Table Mountain”, and Table Mountain it stayed.

Table Bay nearly ended up being named after Antonio da Saldanha. For about a century after his visit the area was known to the Portuguese as “Agoada do Saldanha”, or “the watering-place of Saldanha”. But then the Dutch seafarer Joris van Spilbergen made landfall about 100km up the west coast and mistakenly thought that he had reached Agoada do Saldanha.

As a result the then nameless dent on the west coast acquired the appellation of Saldanha Bay, making it one of the Cape’s oldest recorded place-names, and the original Agoada do Saldanha ended up as “Tafel Baai”, or Table Bay.

Exactly who started calling today’s the former Hoerikwaggo’s pointy left flank “Lion’s Head” has been lost in the mists of time. Some of the earliest maps of the Cape of Good Hope show the “Leeuwenberg”, or Lion Mountain, consisting of the “Leeuwenkop”, or Lion’s Head; the “Leeuwenromp”, or Lion’s Rump, which we now call Signal Hill, and the “Leeuwenstaart”, or Lion’s Tail, with today’s Granger Bay forming its tip.

Lion’s Head and the Lion’s Rump nearly lost their names in 1620, when two squadrons of ships under Humphrey Fitzherbert and Andrew Shillinge called in at the Cape on the way to the Far East to give Table Bay the once-over on behalf of the English East India Company.

The EEIC was then was locked in fierce competition with its French and particularly its Dutch equivalents for domination of the Far Eastern trade, and all three had the same problem: getting to the Far East and back in one piece.

The journey eastwards was particularly arduous, not to say time-consuming and expensive, because to get around the Cape ships from Europe had to sail almost to the coast of Brazil and then double back. By the time they reached Table Bay both ships and crews were usually in poor condition for the months at sea that still lay ahead.

Lying where it did, the Cape was ideal for a sort of maritime truck stop where fresh food could be taken on board and ships repaired, and whoever set up a permanent outpost would gain a great prize in the trade war.

The Dutch East India Company believed strongly in the bottom line and avoided money-wasting pastimes like colonising, annexation, converting local inhabitants to Christianity or making war on them except in the line of business (in fact all these were on a list of “don’ts” Van Riebeeck brought with him), but Fitzherbert and Shillinge evidently were not men who thought small.

They took, in Shillinge’s words “quiet and peaceful possession” of Table Bay and “the whole continent near adjoining” in the name of King James I of England and Scotland. They re-christened Lion’s Head and the Lion’s Rump “Ye Sugar-Loaf” and “King James his Mount” respectively, while the future Devil’s Peak (then known as Windberg”, for obvious reasons) became “Prince Charles his Mount”.

Having planted a large flag with St George’s cross on the new King James’s Mount, they continued on their journey, no doubt in high good humor at stealing a march on their rivals and helping themselves to a new piece of territory for England.

What happened to the flag is not known – presumably the frugal locals soon made good use of it for domestic purposes – but King James’s reaction is a matter of record. Or perhaps “lack of reaction” would be a better word.

It was Shillinge’s and Fitzherbert’s bad luck that James had more pressing things on his mind by the time the news finally reached England, many months later, since he had just been dragged into the Thirty Years’ War because the Emperor Ferdinand II of Spain had invaded the Rhineland in 1620 and dethroned Frederick V, the ruler of Bohemia.

This unfriendly intrusion required some action by James, since Frederick IV happened to be his son-in-law, and the only way to do that was to ask Parliament for enough money to mount a rescue expedition.

The problem was that just then there was no Parliament. James and the politicians had been squabbling for years about his bad money management, and a while earlier he had dissolved Parliament and sent its members home. But now there was nothing for it but to recall them to Whitehall.

It did not go well, since passions had not cooled on either side. The Commons not only proved unwilling to cough up enough for a serious military operation but called on him to declare all-out war on Spain – the last thing he wanted - because its members fondly recalled the vast amounts of gold and silver British ships had hijacked from Spanish convoys coming back from the New World in the time of Elizabeth I.

As if that were not enough, the parliamentarians petitioned the devoutly Catholic James to allow Prince Charles to marry a Protestant and also to enforce the long-established anti-Catholic laws he had inherited. James told them to mind their own business, and when they protested about the infringement of their freedom of speech he dissolved Parliament again.

So it is hardly surprising that James had little enthusiasm to spare for a new colony in the back of beyond, truck stop or no truck stop. As a result, the Leeuwenberg stayed on the maps, and the future Devil’s Peak stayed “Windberg”.

And so, for the first but definitely not the last time, events occurring far away made drastic changes to the Cape’s future.

All of which does not answer the question, of course, about how and why the Lion Mountain got its name in the first place, something about which people have been arguing for more than 300 years.

It was certainly once the happy hunting-ground of the black-mane Cape lions – now long extinct – which preyed not only on its plentiful game but also on the people and livestock in the vicinity, first the Khoi clans and later the Dutch East India Company.

Van Riebeeck’s daily journal makes mention of lions leaping into the livestock enclosure next to the Fort of Good Hope and creating mayhem among his small, precious breeding-herd, and in 1659 the remains of one of his soldiers was found at the tip of the Lion’s Rump with great bite-wounds to the skull that were clearly the work of a lion.

In 1705 the visiting astronomer Peter Kolbe wrote: “Some say the Lion’s Head receives its name from its being formerly a great haunt of lions. About 30 years ago a grim one took up residence on this hill and, for a considerable time, made woeful Havoc among the cattle”.

But Lion’s Head also seems to have captured people’s imagination from the earliest times, and inspired all sorts of fanciful thoughts and even pictures.

In 1673 Willem Ten Rhyne noted that the name derived from “the shape that resembles the beast”, and not from “the roaring of the winds (like a Lyon) as Mercator would have it, who affirms that this Cape is subject to such frequent and terrible tempests that nobody, unless in case of the highest necessity, dares to cast anchor here.”

And the fancies endured through the centuries. In 1853, 180 years after Ten Rhyne’s observation, the Russian novelist Ivan Alexander Goncharov passed through Cape Town en route to Japan and wrote: “Lion’s Head is said to be like a lion lying down; the oblong hill indeed does recall the backbone of some kind of animal, but the conical peak by which the hill joins with Table Mountain is quite unlike a lion’s head.

“However, the very crown of the peak does form the quite regular figure of a sleeping lion … it could not have been carved out better on purpose; one wanted to take it down and out it on the table as a paperweight.”

Two decades after Goncharov, the prolific early Cape journalist William Layton Sammonds, whose nom de plume was “Sam Sly”, wrote that from Table Bay “his forehead, nose, mouth and chin, seemed well-defined and his position natural and majestic; but as a symmetrical figure, of course, he looked out of all proportion …

“I thought, woe betide the high gentleman at the flagstaff if he should at any time (being sick of lying so long) arise and shake his mane and whisk his tail, and then crouch again in his old, stately and solemn position”.

But with any sort of luck the great stone lion will not rise to shake himself any time soon, since Cape Town – unlike San Francisco – does not lie on a major tectonic fault-line.