With a Booming Bark... 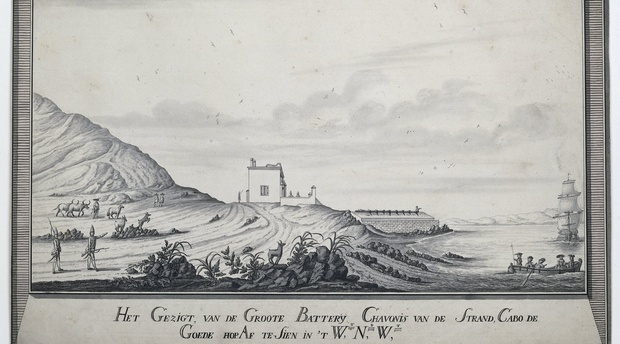 Although De Chavonnes died before the great battery was completed, his work was done.

Over the next 70 years there was a vast expansion of the Cape’s defences; the Chavonnes Battery was the first of a chain of coastal fortifications which would eventually protect not only Cape Town’s and its flanks but its "back door", the road over Kloof Nek from Camps Bay.

With one minor exception, though, none of them ever fired a shot in anger, and were probably not fully manned except on rare occasions (for example, the Chavonnes Battery’s usual peace-time complement was a small permanent garrison which would be augmented from various sources during times of emergency).

But the first duty of any armed force is not to fight wars but to avoid them by deterring any aggressors. And the fact is that during its first 143 years the Cape outpost was not once attacked by anyone.

The big guns grinning from its batteries’ ramparts were a deterrent in themselves.

In the early 18th Century, ships were the equivalent of today’s airborne forces, because they could land troops at any spot along a hostile coast where boats could go ashore. But a well-found shore battery like the Chavonnes Battery posed a deadly danger to any such amphibious operation.
It was a stable firing platform, so that its gunners could bring accurate fire to bear on hostile ships, or rain grapeshot on boats trying to land troops to its left or right. It could mount heavier guns than many ships because it had fewer weight limitations and had more ammunition readily available because space was not a problem either. Its stone-faced walls could ward off any projectiles a ship could fire.

The famed Cape chronicler Otto Mentzel – himself a soldier in the Castle garrison from 1733 to 1741 – later wrote that it...    "is best situated for a bombardment of enemy ships. It is built upon rocks and surrounded by them, while its guns are placed low down over the water. If the gunners did but train them in a directly horizontal position on their carriages … it would scarcely be possible for them to miss an enemy ship, while the holes that the balls would make would be close to the water-line, and therefore very dangerous".
The battery could dish up multiple other miseries. In addition to ship-killing solid round shot it could fire bar shot or chain shot to destroy sails and rigging, or grape and canister shot which fanned out in a deadly shotgun-like spray after leaving the muzzles of its guns.
Two shot-ovens also allowed its gunners to fire round shot brought to red heat – a terrible threat to wooden ships with their huge spreads of highly inflammable sails.

Its main weakness was that it was vulnerable to attack from the rear, like most batteries of its type. This was never addressed, but its later next-door neighbour to the east, the Amsterdam Battery, was capable of all-round defence.