The Heroes of Blaauwberg by Willem Steenkamp

Posted by Willem on Mon January 5, 2015 in The characters. 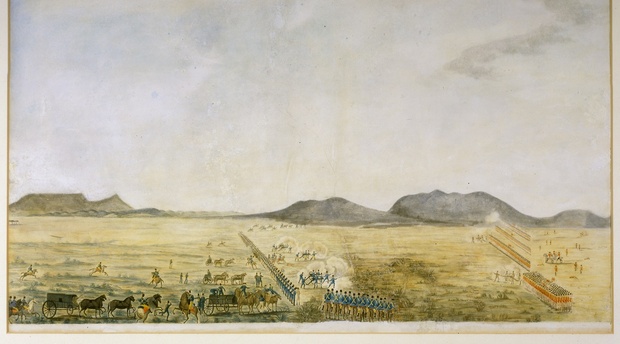 To commemorate the Battle of Blaauwberg,
the Cannon Association of SA will be hosting
Cannon Firings and demonstrations of the craft
on Saturday 10th January 2015
at The Castle of Good Hope
from 10 am to 3 pm.
http://www.caosa.org.za/

The Heroes of Blaauwberg

Who were the heroes of the Battle of Blaauwberg? It's a sure bet that no Capetonian will be able to answer that question, because the Battle of Blaauwberg has been allowed to vanish into such obscurity that at most we have a vague recollection that this was when the Cape became a British colony. Were there, in fact, any heroes that day?

The answer is yes, there were heroes at Blaauwberg, probably the most important battle ever fought in Southern Africa because of its long-term consequences.

In brief, the battle took place because the British, who were mid-way through their long, fierce struggle with France, saw possession of the Cape – then controlled by the revolutionary French-leaning Batavian Republic which had been proclaimed in the Netherlands – as a commercial and strategic necessity.

As early as 1795 Sir Francis Baring, chairman of the English East India Company, had pointed out to the then Secretary of State for War, Henry Dundas, that the Cape “commands the passage to and from India as effectively as Gibraltar does the Mediterranean”. Equally trenchantly, Dundas's own Under-Secretary noted that although the Cape was “a feather in the hands of the Dutch” it would become “a sword in the hands of France ”.

So early in January 1806 a massive British invasion fleet of more than 60 men-of-war and transports anchored in Table Bay during a howling south-easter, waited for it to abate somewhat and then sent about 5 000 soldiers, sailors and marines wading ashore at Losperd's Bay, today's Melkbosch.

The British set off for the Blaauwberg while Lieutenant-General Jan Willem Janssens, Governor of the Cape, did the same from the opposite direction with his small scratch force of about 2 000. The British reached the heights first, and on the morning of 8 January battle commenced on the Cape Town side of the mountain.

Within a matter of hours it was over: vastly outnumbered and failed by his best regiment, Janssens withdrew towards the Hottentots Holland mountains and the British were preparing to march on Cape Town . A turning-point had been reached in the history of Southern and Central Africa , although no-one realised the extent of it.

To know who the heroes of Blaauwberg were, it is necessary to know who fought there on the Batavian side. Janssens had five groups of professional soldiers: the 5th Battalion of the Regiment Waldeck, a mercenary unit in Batavian service; the 9th Battalion of the Batavian Rifles; the 22nd Regiment of Foot, a Batavian infantry unit; a small group of Batavian dragoons (mounted riflemen); and a detachment of Batavian light horse artillery under a Lieutenant Pellegrini.

He also had something over 200 French marines and sailors who happened to be available at the Cape, plus a contingent of locally born men made up the Hottentot Light Infantry, a full-time regiment, and two part-time volunteer units, the light dragoons from Swellendam and the Javanese Artillery Corps, recruited from the sizeable population of freed slaves, their descendants and other Muslims at the Cape.

The villains of the piece were the Waldeckers. Janssens had expected much of them; but they were the only one of his units not to cheer him enthusiastically before the battle, and they cut and ran almost immediately. This caused the Dutch battle-line to crumble, with other units withdrawing because their flanks were now exposed.

And the heroes? The French were heroes: they held out for as long as possible and then withdrew after suffering heavily. So were Pellegrini's horse gunners, who fought to the bitter end and only withdrew when Janssens personally ordered them to retreat. So were the three units of Cape men, who stood and fought to the last moments, and paid the price.

What they bought with their blood was a breathing-space that enabled Janssens to withdraw with the rest of his army and his slow-moving supply wagons. As a result there was no unconditional winner-takes-all surrender, but a carefully negotiated treaty of capitulation that benefited the people of the Cape .

The motivation of the Frenchmen and the Batavian artillerymen are obvious enough, but what of the local men? They had very little in common as regards material things or even religion. But one has to look beneath the surface.

For one thing, all or most were born and bred at the Cape , and all spoke the language that would later be called Afrikaans. Then again, their status had changed. For more than 150 years they had not had what we would regard as citizenship of anywhere. But the Dutch East India Company was long gone, and since early 1803 they had been citizens of the Batavian Republic , which was no mere token status.

In less than three years Janssens and Commissioner-General A J de Mist had wrought great changes at the Cape according to the tenets of the Batavian Republic , which modelled itself on the egalitarian ideals of the French. To mention only two, they had forbidden the importation of slaves and planned to emancipate all those in bondage, and had extended official recognition and protection to all faiths, including Islam (which under the DEIC had been tolerated but not officially recognised).

It might not be going too far to say that the Cape men were fighting for a vision of a better future, knowing that the British were the mortal enemies of the ideals of both the French and Batavian Republics . Right or wrong?

Well, it appears very likely that if the Batavian rule had not ended in January 1806 the Cape 's slaves would all have been freed two decades before it actually happened.

It stands to reason that we should honour Janssens and De Mist, two great reformers, especially by the standards of those times. It stands just as much to reason that we should honour the Swellendam light dragoons, the Hottentot Light Infantry and the Javanese Artillery Corps, who laid down their lives not just for the ideals of the Batavian Republic but also to allow a negotiated capitulation. Not to mention the Frenchmen and Batavian gunners.

But we don't. There is no memorial to them anywhere in Cape Town, no wreaths are laid to their memory, nobody – and this is the ultimate insult – even remembers what they did or where they are buried. The heroes of Blaauwberg deserve better.

ASSEGAIS, DRUMS AND DRAGOONS
A Military and Social History of the Cape
by Willem Steenkamp

‘This book is about the genesis of the South African foot soldier of today – that small, usually dirty, frequently over-tired and often hungry figure – without whom an army cannot ring the gong of victory. He did not spring up full-grown out of the ground. He grew to what he is today through an evolutionary process that took several centuries.’

What motivated a small multiracial force of Cape-born soldiers – whites, coloureds and Malays – to put up such stiff resistance at the Battle of Blaauwberg in 1806, in spite of odds so overwhelming that even some long-serving professional soldiers broke rank and ran? This was the intriguing question that launched author Willem Steenkamp’s research. It was an investigation which eventually took him back to 150 years before Jan van Riebeeck landed at the Cape in 1652, and involved examining the social as well as the military history of the Cape.

What Steenkamp discovered differs from what most South Africans think about that period, and he corrects a number of serious misconceptions not only about the soldiers of 1510-1806 but about the social and political development of the Cape. For students of the Napoleonic Wars, the book provides new information about a forgotten aspect of that conflict; for the ordinary reader here is a story no-one has ever told before in its entirety.

Descended from a 1690s-era solider, Willem Steenkamp is a writer, journalist and specialist tour guide who has also been a solider, a security advisor and a director of military tattoos and other spectacles, among several other things. Since childhood he has been absorbing the Cape’s history from family stories (one of his ancestors was a hero of the Battle of Blaauwberg) and voluminous reading. And yes, he regularly fires flintlock muskets and muzzle-loading cannon.

Willem conducts tours at the Chavonnes Battery, the V&A Waterfront Historical Walking Tour and in-depth tours of the Castle of Good Hope (dressed in period costume on request). He also assists with the training and mentoring of the Chavonnes Battery Tourist Guide Learners. Join us for a Guided Tour

Signed copies of Assegais, Drums and Dragoons can be purchased at the Chavonnes Battery (Shipping available) Contact us to reserve a copy

The Durbanville Heritage Society recently hosted a re-enactment of the Battle of Blaauwberg in miniature, here's an article on the event: Heritage Portal 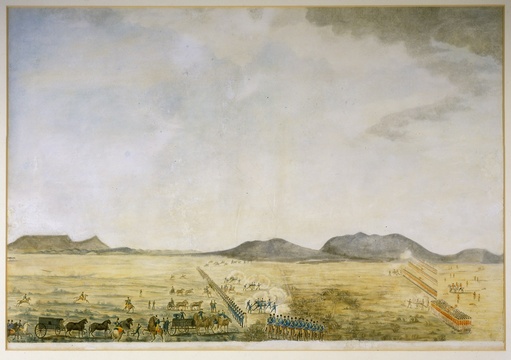 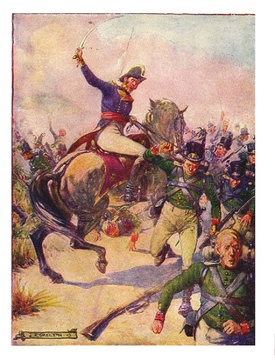 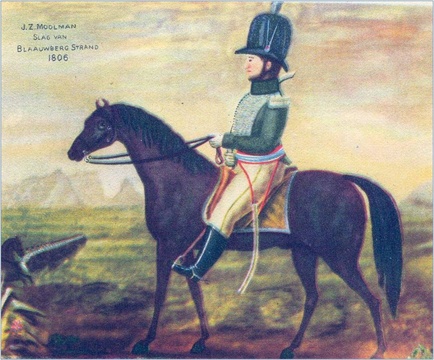