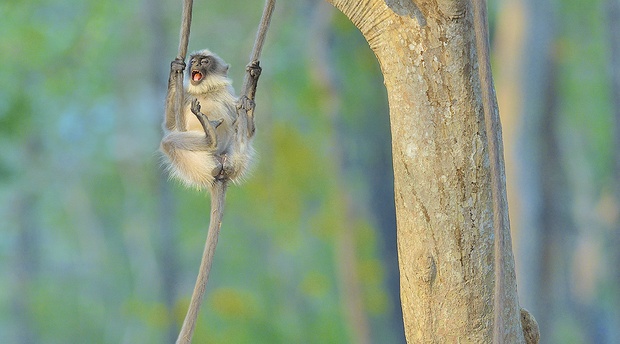 Thomas was on safari in Bandipur National Park in Karnataka, India, in search of the park's elusive tigers, but these playful gray langur monkeys caught his eye instead.

See Thomas's image, now showcased along with 100 other winning photographs chosen by the judges in the Wildlife Photographer of the Year exhibition on show at the Chavonnes Battery Museum until 15th April 2016.

KING OF THE SWINGERS

Thomas Vijayan's image of langurs in India's Bandipur National Park has been crowned winner of this year's Wildlife Photographer of the Year People's Choice Award.

Vijayan travelled from Canada to India to photograph tigers and leopards. After a day on safari in Bandipur with no sight of the big cats, his attention was caught by a group of gray langurs playing on a nearby tree.

With the evening light descending, a small langur lowered itself down on the tails of two adults, using them to swing beneath a branch.

'Big cats are my favorite subjects in photography,' said Vijayan. 'But on this particular day, when the safari was almost over with no sighting of any big cats, everyone was looking around hopefully.

'I saw a few langurs playing on a tree, and it struck me that there was a chance for a good photograph. While everyone else was waiting for the tigers, I came back with this mesmerising moment.'

The top five images are just some of the images now on display at the Wildlife Photographer of the Year exhibition.

They can also be seen in the Natural History Museum: Wildlife Photographer of the Year 2015 online gallery.

Tickets available at Webtickets or the door... 7 days a week, 9 am to 8 pm (Doors close at 7 pm) Profit of the exhibition in support of museum social goals... 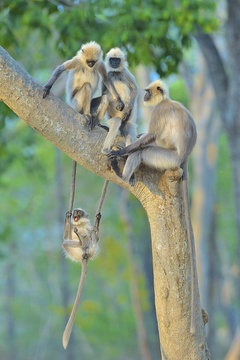