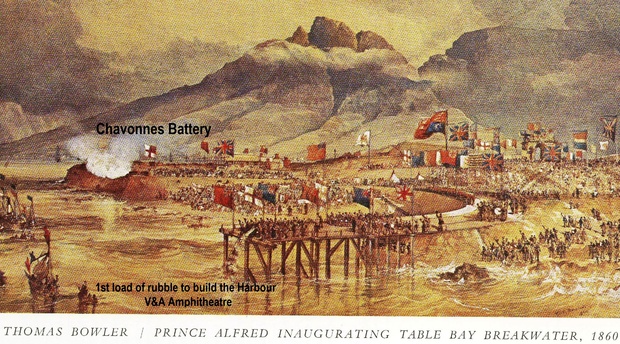 This Saturday (7 October) is one of those occasions: the guns will make themselves heard far and wide once more at a sail-past by the Royal Cape Yacht Club to mark the opening of the new yachting season.

The proceedings will start at the RCYC marina in the eastern docks, with all participating yachts dressed and ready to depart by 13h00, following Royal Cape II to the muster-point at Granger Bay, north of the Breakwater.

In line astern the yachts will follow Scarlet Sun into the V&A Waterfront, through the Clock Tower Cut and into the Alfred Basin, entering to starboard and moving in an anti-clockwise direction around the basin before heading out to sea again.

As they pass in review, each participating yacht will salute RCYC Commodore Vitor Medina by dipping her club burgee while her crew shout: “Three cheers to the Commodore!”, and the guns lined up outside the battery will return the age-old greeting with the traditional gun smoke and noise.

And that’s not all: if visitors would like to find out more about the Cape’s fascinating history they can visit the beautifully preserved remains of the battery in the Chavonnes Battery Museum, with its sturdy walls built of Table Mountain rock and cement made from burned sea-shells.

Inside, visitors can enjoy dioramas, illustrations of the early Cape, detailed models and displays that tell them all they need to know – and never knew – about old-time cannon and the different types of ammunition they could fire. Captain Jack Sparrow, eat your heart out!

They can marvel at the items found in the battery’s fresh-water well (or just make a wish), and get in personal touch with history by feeling the sand of the original Cape Town shoreline that has been buried for 300 years … and if they wish, they can wear a tricorne hat as they time-travel to Cape Town of the 17th and 18th Centuries.

Entrance to the Chavonnes Battery includes the Underwater Photographer of the Year 2017 photo exhibition, with 50 large and remarkable images from the oceans, rivers and seas of 27 countries, including two from South African waters. The exhibition is presented in 10 categories, three of which are life on British waters exclusively.

The battery is wheelchair and pram friendly, with FREE WIFI

For more information about the museum...