The ghost that lingers 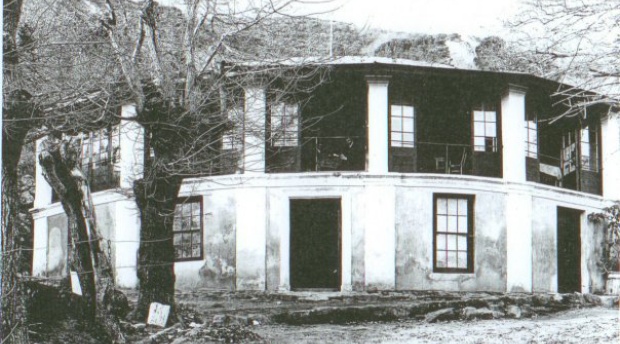 Willem tells us about the Round House located in Kloof Neck and some of it's colorful characters.

If Lion’s Hill had existed some two centuries ago, a resident out taking a long walk up Signal Hill might have met up with a very strange sight: a tiny man in military uniform, complete with cavalry Sabre and cocked hat, shading himself with a parasol as his horse toiled up the rough wagon-track which would later be Kloof Nek Road in the company of a manservant and a French poodle called Psyche.

This would have been none other than Major James Barry, a doctor of the military garrison, on his way to a shooting lodge called the Round House on the other side of Vlaggemans Kloof for some blood sport in the company of his good friend, Governor Lord Charles Somerset.

Dr Barry was surely one of the most peculiar of the many strange individuals whom the currents of destiny washed up on the Cape’s shores in the earlies.

Shrill of voice, he was so short and frail that he wore three-inch soles on his shoes and reputedly padded his shoulders with cotton wool, the result being that the Malays gave him the nickname of “the Kapok Doctor".

In the exceedingly macho British Army of the time he should have been a figure of fun, but his fellow-officers kept their comments to themselves because the little red-haired medico was not only known for flirting outrageously with women – married or otherwise - but was also notorious both for his ferocious temper and his skill with the rapier, the deadly dueling sword.

His reputation for ferocity was cemented by a famous pistol duel he fought with another officer named Josias Cloete at the Alphen estate in Constantia, now the Alphen Hotel. Neither suffered any injury, so Barry was either a bad pistol-shot who couldn’t hit what he was aiming at, or a very good one who made sure that he missed Cloete.

Why? Possibly to avoid unduly embarrassing his good friend, one of the few he had, since dueling was forbidden in the British Army.

Just how good a friend he had in the Round House (and, it was rumored, further a field as well) can be seen from the fact that although both were equally guilty, Barry got off unscathed while Cloete was sent off to a dead-end posting on Tristan da Cunha island – although this clearly was not a total career disaster for Cloete, since he was eventually knighted.

One of the reasons for the strange friendship apparently was the fact that Somerset credited Barry with saving the life of one of his daughters. This might well have been the case, since the little doctor was a very clever and experienced medico who had graduated from Edinburgh University when just 18 years old and had then served in Spain, Belgium and India before being posted to the Cape.

Barry is best remembered today for his personal oddities, but he was also an outspoken campaigner against ill-treatment of the poor and ill by corrupt or incompetent officials, an advanced thinker on such things as urban sanitation and a skillful surgeon who is said to have performed the first Cesarean operation in the world at the Cape in 1826.

It is hard to visualize the Round House as a shooting lodge today, but two centuries ago the country on the other side of Kloof Nek was almost completely undeveloped and teeming with game. Somerset had already acquired a luxurious and pleasantly isolated holiday residence called Marine Villa at Camps Bay, and in due course also got the use of the Round House, a mere 15 minutes’ ride away along a pleasant oak-lined track which exists to this day.

Contrary to popular legend, it did not belong to him but to a shrewd Cape Town merchant named J C Horak, who probably saw the opportunity for some serious ingratiation by leasing or lending it to Somerset.

The Round House was more than just a shooting-box. It had store-rooms and slave quarters underneath, and several outbuildings. But Somerset, a famously extravagant spender who liked his creature comforts, naturally made some improvements. It is said that this included constructing a high veranda with French windows which looked out over the sea.

Barry’s star began to wane, though, when Somerset’s lavish spending landed him in trouble. While Somerset was visiting England his temporary replacement, Sir Rufane Donkin, slashed government expenditure on maintenance of Somerset’s properties, including the Round House, threatened to horse-whip his son Henry and initiated a campaign to remove him from office.

Somerset was acquitted on all counts, but resigned in a huff in 1827. No doubt this left Dr Barry rather vulnerable, given his talent for making enemies, and in 1828 he left as well after a final run-in with the Fiscal, then one of the Cape’s most powerful officials.

Barry went on to serve – as irascible as ever - in places like Mauritius, Trinidad, St Helena, Malta, Corfu, the Crimea (where he reportedly quarrelled with and insulted Florence Nightingale), Jamaica and Canada. Then he retired to England in the rank of Inspector-General of Army Hospitals, the British Army’s highest medical post.

He died the following year, after which it was reported that his distinctly effeminate appearance was no genetic anomaly but resulted from the fact that he was actually a she, which many people now claimed they had known all along. And so Dr James Barry exited this world, as controversial in death and in life … although it is just possible that residents of Lion’s Hill might still meet Dr Barry if they venture over the Nek.

The Cape historian Eric Rosenthal wrote that “the shade of the mysterious Dr. James Barry has been observed on many occasions" at the Round House, and in 1944 Napier DeWitt noted that once upon a time a ghost was said to haunt the woods in the shape of “a small-statured man in the undress uniform of an officer of a British line regiment of the Georgian period … (with) a thin ascetic face (and) large protruding eyes”, who carried a heavy cane.

According to DeWitt the ghost, who usually appeared on windy moonlit nights following heavy rain, was gradually seen less and less, and finally not at all. Well, perhaps. As recently as the 1970s one Cape Town journalist was drinking tea at the Round House one Saturday afternoon when he spotted the wraith-like figure of a very small man in a long-tailed coat and breeches, sitting quietly on an equally insubstantial high-backed settle near the front door …

Could it have been the ghost of Dr James Barry, taking a breather after dodging the heavy modern weekend traffic heading over the Nek to Camps Bay?

Dr James Barry spent time at the Chavonnes Battery where you can find out more about her, to book a tour CLICK HERE