Posted by Chavonnes Battery on Wed January 18, 2017 in Photo Exhibitions. 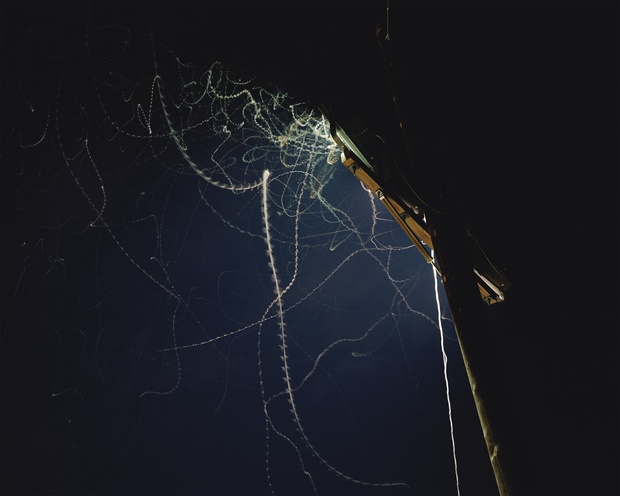 A photo by Simon Norfolk depicts a gate at the U.S.-Mexican border. In this night-time image, Norfolk captured the flight of moths in neon light, their trajectory resembling twisted strands of wire. “And what is the light?” Little wonders. “Is it what we think it is? I don’t think the light is even what Americans think it is, not to mention people from impoverished regions in Central America. I think we’re all trying to fly to that light too.” [Myles Little]

A long camera exposure captures the flight of moths as they destroy themselves against the hot security lights, from Arizona/Mexico Border (USA) 2006 by Simon Norfolk (INSTITUTE)

Defence manufacturer Boeing has been given what could be a $2 billion contract to install a massive system of fibre-optic fencing and radar systems to keep out the wetbacks. Night-vision cameras networked to motion detectors buried in the desert sand will form an electronic barrier that will make the Berlin Wall and even the Israeli/West Bank Fence seem like so much Lego.

For now, the border fence is constructed from large, corrugated, clip-together metal panels up-righted into the earth – actually re-cycled first Gulf War, clip-together “instant-airstrip”. And until the cyber wall is built, the National Guard and Border Patrol are using large industrial lighting units dotted across the rolling hills, like a Christo installation.

In the evening, from the Mexican side, come the sounds of dogs barking, laughter, children’s games and the warm spill of orange street light. On the US side, nothing but eerie green light of mercury halide lamps, the endless, growling sound of their diesel generators and the quiet crunch on gravel of the Border Patrol’s SUV’s. (This work was commissioned for the New York Times Magazine) [Simon Norfolk]

(b. 1963, Nigeria) Norfolk is a landscape photographer whose work explores the “battlefield” in all its forms. He has photographed the world’s worst war zones and refugee crises. He has won Le Prix Dialogue at Les Rencontres d’Arles, the ICP Infinity Award, and two World Press Photo Awards. He has work in major collections such as the Museum of Fine Arts, Houston, the J. Paul Getty Centre Museum, and Tate Modern.

Opening Hours:
Mon - Wed: 9 am to 4 pm
Thu to Sun: 9 am to 6 pm
Tickets available at the door and WEBTICKETS